Mark your calendars for the Center for Gender and Sexuality Law’s Spring 2021 Frontlines of Gender Justice speaker series.

Khiara M. Bridges is a professor of law at UC Berkeley School of Law. She has written many articles concerning race, class, reproductive rights, and the intersection of the three. She is the author of three books: Reproducing Race: An Ethnography of Pregnancy as a Site of Racialization (2011), The Poverty of Privacy Rights (2017), and Critical Race Theory: A Primer (2019). She is a co-editor of a reproductive justice book series that is published under the imprint of the University of California Press.

Julie C. Suk is a leading scholar of constitutional gender equality in the United States and around the world. Her recent book, We the Women: The Unstoppable Mothers of the Equal Rights Amendment, charts the legal, historical, and political significance of the ERA’s current resurgence, enabled by generations of women constitution-makers. In addition to her appointment at The Graduate Center, Professor Suk teaches as a Florence Rogatz Visiting Professor of Law at Yale Law School, and has previously taught at the law schools of Cardozo, Columbia, Harvard, UCLA, and University of Chicago Law Schools.

Farah Diaz-Tello, J.D., is Associate Legal & Policy Director for If/When/How, where she helps develop and execute litigation strategy, contributes legal analysis and drafting expertise to assist state and grassroots partners in reaching their policy goals, and provides legal information and training to reproductive rights, health, and justice activists. Farah continues and expands the work she began in 2016 at the SIA Legal Team, which joined forces with If/When/How in 2019. Prior to the SIA Legal Team, Farah worked at National Advocates for Pregnant Women, where she established and helmed programs in human rights and birth justice. Her publications for scholarly and popular press address criminalization of pregnancy outcomes, economic coercion in childbirth, obstetric violence, and reproductive issues in pop culture.

Clement Lee is the Associate Director, Immigration Legal Services at the Sex Workers Project at the Urban Justice Center, and as part of SWP’s legal team, he provides legal services to immigrant communities impacted by sex work. In his work, Clement advocates for the rights of LGBT communities who have been persecuted on account of their sexual orientation or gender identity, or who have been trafficked, and other individuals whose undocumented status has pushed them to the fringes of the formal economy.

Join via Zoom at tinyurl.com/genderjustice2021 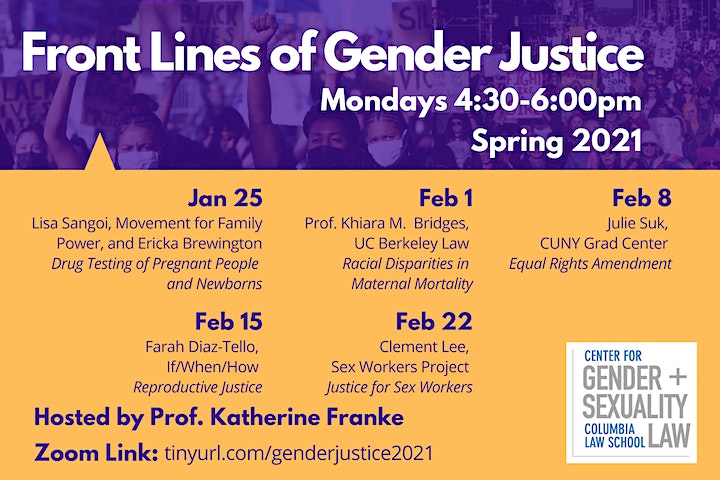